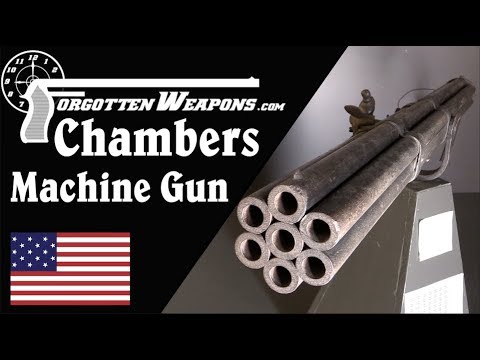 Joseph Chambers invented a repeating flintlock weapon in the 1790s, and I think it is appropriate to consider it a “machine gun”. The design used a series of superposed charges in one or more barrels, with specially designed bullets that has hollow central tubes through them. This would allow the fire form a detonation charge to transit through a bullet at the rear and set off a subsequent charge. The result was a single trigger pull to use a flintlock action to start an unstoppable series of shots. Chambers made pistol and musket versions, as well as a full-on mounted machine gun.

He submitted his design to the fledgling US War Department in 1792, but it was not accepted. He brought the guns back to their attention when the War of 1812 was declared, and this time he found an eager client in the United States Navy. More than 50 of the machine guns were built and purchased to use on Navy warships. This version had 7 barrels, each loaded with 32 rounds, for a total of 224 shots, at (apparently) about a 120 round/minute rate of fire. The British found out about the guns and made some effort to reverse engineer them, and there was also interest in France, the Netherlands, and Spain. Ultimately, the potential unreliability of the system prevented more widespread adoption, but the gun is a fascinating example of early automatic firearms.

Thanks to the Liege Arms Museum for access to film this for you! If you are in Belgium, definitely plan to stop into the museum, part of the Grand Curtius. They have a very good selection of interesting and unusual arms on display.