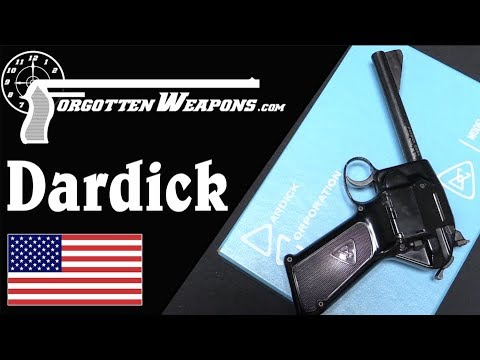 This is Lot 1953 in the upcoming RIA December Premier auction.

The Dardick 1500 was a magazine-fed revolver designed by David Dardick in the 1950s. His patent was granted in 1958, and somewhere between 40 and 100 of the guns were made in 1959, before the company went out of business in 1960. The concept was based around a triangular cartridge (a “tround”) and a 3-chambered, open-sided cylinder. This wasn’t really of direct benefit to a handgun, but instead was ideal for a high rate of fire machine gun, where the system did not need to pull rounds forward or backward to chamber and eject them. In lieu of military machine gun contract, Dardick applied the idea to a sidearm.

The Model 1500 held 15 rounds, inside a blind magazine in the grip. It was chambered for a .38 caliber cartridge basically the same as .38 Special ballistically. A compact Model 1100 was also made in a small numbers, with a shorter grip and correspondingly reduced magazine capacity (11 trounds). A carbine barrel/stock adapter was also made. The guns were a complete commercial failure, with low production and lots of functional problems. Today, of course, they are highly collectible because of that scarcity and their sheer mechanical weirdness.