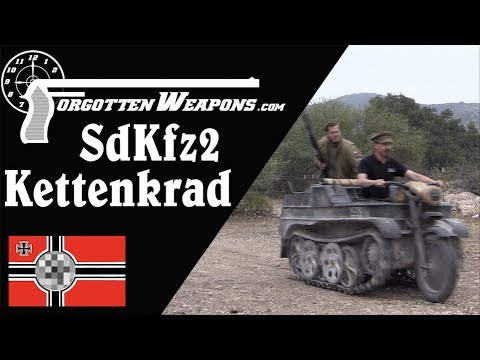 The Sd.Kfz. 2 Kettenkraftrad (aka Kettenrad) is a deliciously German sort of vehicle, a small utility tractor made with a pair of treads and motorcycle front wheel. It was powered by a 4 cylinder Opel automotive engine generating 36 horsepower, and had a 3-speed gearbox with high and low range transfer case. Top speed was 44 mph, and it could tow about 1,000 pounds of ammunition or other supplies in a small 2-wheeled trailer, or directly tow light artillery pieces.

The vehicle was developed in 1939, and in mass production in time to see substantial use in Operation Barbarossa; the German invasion of Russia. Although complex to maintain and expensive to produce, the Kettenkrad was quite well suited to the terrain and distances of the Eastern Front. As the war progressed and supplies became scarcer and artillery became heavier it was less universally useful, but remained in service until the very end of the war, tasked with jobs as mundane as towing aircraft at airfields. After the war, they were put into civilian agricultural service (much like the Jeep in the US).

This example is in the rental fleet at DriveTanks.com, available for instruction and driving to anyone. It is one of my very favorite vehicles form World War Two, and I really appreciate DriveTanks giving me the opportunity to do some driving on it and show it to you! See all their available rentals here: