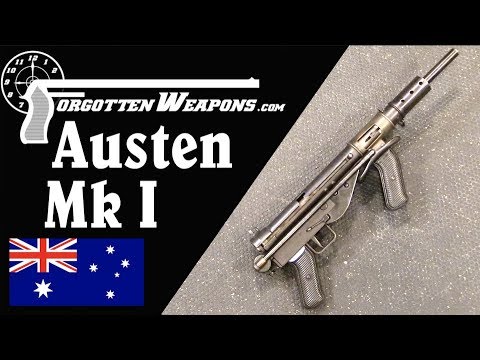 When World War Two began, Australia saw little threat of invasion from Germany (obviously), and sent a substantial number of firearms to Britain to help arm the Home Guard there, which was seriously concerned about the possibility of a German invasion. When Japan and Australia declared war in December 1941, the situation immediately became much more serious for Australia, and the government began looking for arms.

At the start of the war, there were effectively no submachine guns at all on the continent – just a couple examples. These included an MP38 somehow confiscated by Australian customs, which would take on a significant role. Australia looked to Britain for arms, and they were sent a technical data package to produce the Sten MkII – but found the design pretty underwhelming. Australian manufacturers decided to make their own improvements to it, using elements of the MP38 – specifically the sealed telescoping recoil spring system and underflowing stock. They also gave the gun a pair of pistol grips for improved handling.

The Owen SMG was going into production at this time, and had been in development for a while under private civilian supervision. The Australian Sten, called the Austen, lacked that developmental track record and it went into production without passing proper trials. It faced significant manufacturing delays and reliability problems, and was not well liked by troops – in contrast to the excellent Owen. The Austen was ultimately made in smaller numbers than the Owen (19,914 of the MkI guns) and pulled from combat use in August of 1944.

Many thanks to the Royal Armouries for allowing me to film this rare artifact! The NFC collection there – perhaps the best military small arms collection in Western Europe – is available by appointment to researchers:

You can browse the various Armouries collections online here: