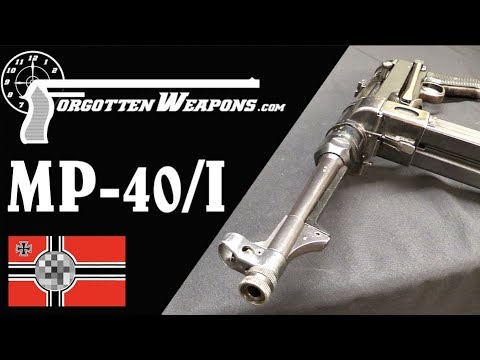 This is Lot 2051 in the upcoming October 2019 Morphys Extraordinary auction.

The MP40/I was an experimental modification of the MP-40 submachine gun developed by the Erma company (we think) in late 1942. It was presumably developed in response to complaints of Soviet fire superiority with SMGs because of their large drum magazines (and also the larger number of SMGs used by the Soviet forces compared to German units).

The concept is a pretty simple one – the regular magazine housing was replaced by a much wider housing with a sliding block that held two separate standard magazines. One of the two magazines would always be positioned where it could feed and fire, and when that magazine was empty the shooter could simply slide the block to one side and move the second (still full) magazine into position to fire. The prevented the need to fish around in a slow magazine pouch to find a new magazine when a reload was needed.

However, there were several disadvantages to the dual magazine system. For one thing, an MP-40 with two full magazines hanging off it becomes quite the heavy and poorly-balanced weapon to handle and carry. The additional open areas required for the sliding block were much more prone to gather dirt and foul than the standard gun, and the extra weight on the relatively thin receiver tube often contributed to creases or other damage to the magazine well and ejection port areas of the gun, rendering them unusable. The large amount of m metal removed from the receiver tube also left it much more vulnerable to bending than a standard MP40.

Only a small number of these guns were ever made (around the middle of 1943), and very, very few survive today. They were made form preexisting gun retrofitted, and do not appear have comprised any specific serial number block. In addition to the magazine housing, the conversion process also involved slightly shortening the ejector and reshaping the bottom of the buttplate so that it would clear the new magazine release catches.