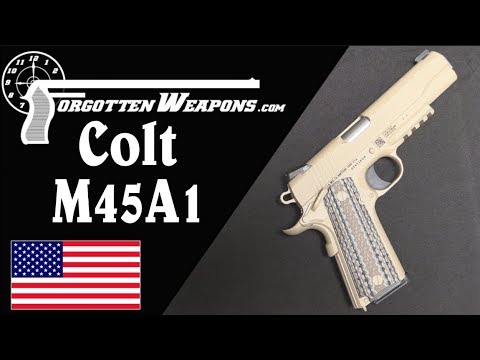 This is lot #446 in the upcoming RIA Premier Auction. It was scheduled for April, but has been postponed – check their web site for upcoming Online Only auctions every month, though!

When the US military adopted the Beretta 92 as the M9 pistol in 1985, some elements of the USMC (MEUSOC and Force Recon, among others) opted to retain the 1911 as their sidearm. For about 15 years they maintained a supply by taking existing M1911A1 pistols and having the precision rifle team at Quantico rebuild them with high end commercial parts into truly outstanding match-quality guns, designated the M45. However, these guns needed relatively frequent service, and the rifle team was only able to supply a limited number of them each year. When deployments increased after 2001, a new solution was clearly required. As an interim measure in 2003, a batch of Kimbers was purchased, and a formal contract was signed in 2012 with Colt for the M45A1. That’s the pistol we are looking at today, as a quantity of them were recently returned to Colt and released onto the civilian market. This is the last gasp of the 1911 as a formally issued sidearm, as the M45A1 was replaced in 2016 by the Glock 19.