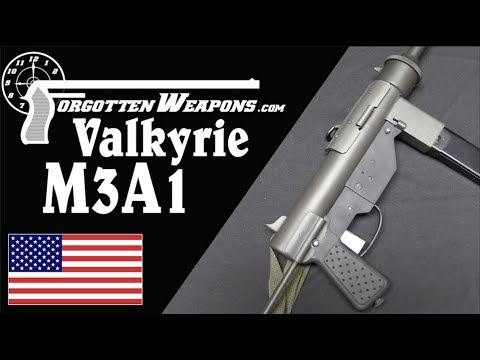 This is Lot 723 in the upcoming RIA December Premier auction.

Valkyrie Arms was formed in 1993 to produce semiautomatic copies of classic military machine guns, and in 2004 they introduced a semiauto M3A1 “Grease Gun”. The M3 and M3A1 are particularly rare guns as registered full autos, and no other semiauto copy has been made, as parts kits are also quite rare, and the stamped construction does not lend itself to economical small-scale production. Valkyrie’s solution to this was to not copy the original production methods, and instead build the guns from a tube and a milled aluminum lower block. This lower blocks contains an AR15 trigger assembly, and the finished gun is closed-bolt and hammer fired. A few original parts were sourced for the project; the magazine release, ejection port cover (modified), and stocks – as well as using standard original magazines.