Trailblazer® Firearms, innovators behind the LifeCard®, the .22 LR single-action, single-shot folding pistol, is pleased to announce that the LifeCard has been named the Dec. 30, 2017 NRA Gun of the Week and featured in the video series with host American Rifleman’s Christopher Olsen.

“It’s an honor for our small start-up company to gain the attention of the most prestigious Second Amendment rights organization in America, the NRA,” Aaron Voigt, president of Trailblazer Firearms and designer of the LifeCard, remarked. “You wouldn’t expect such a small utility gun to catch the attention of the firearms media, but the LifeCard certainly has. As unique as it is, in size, folding capability and weight, we are finding our customers are truly impressed with the quality machining and finishing of the gun, as well as its performance.”

Voigt, one of six kids, was raised to love the outdoors and respect the American tradition of firearms and hunting in the mountains near Asheville, North Carolina. At 18 he joined the USMC Reserve, M Battery, 14th Marine Regiment in Chattanooga, Tennessee and rose to the rank of Lance Corporal. In the early 1990’s, Voigt transferred inter-service to the Army for active duty and was deployed to Kuwait and advanced to Specialist E-4. After a stint in South Korea, Voigt separated from the military and returned his family to his beloved mountains where he shifted careers.

Always the gun enthusiast, in 2010 Voigt hit upon an idea of a unique pistol. The idea slowly became a dream and a long drawn out reality as Voigt tackled the jungle of patents, trademarks, prototyping, machining, licensing, marketing and more. After a seven-year incubation period, Voigt finally brought his “last gun you’ll leave behind” to market through Ellett Brothers and Jerry’s Sport Center.

“This diminutive back up pistol isn’t just a novelty item, it is a real functioning, single shot pistol that could just save your life. I’ve always been a proponent of .22 rimfire for backup and / or survival and this package makes a whole lot of sense to me,” commented Olsen in the video. “The LifeCard doesn’t seem like much and I think that is the real appeal here. All in all, it is a perfect pocketable combination.”

The LifeCard, at under seven ounces and only a half an inch thick, is just about the size of credit card when folded and features a discreet folded package that easily carries in a jean pocket or in any type of bag or pack. Unfolded, the LifeCard presents a full-size handle for a positive grip. With built in safety features, the LifeCard is totally safe to carry in its folded position.

“Host Christopher Olsen identified the LifeCard as a backup pistol,” Voigt continued. “And the LifeCard can be used as a backup and as an every-day carry for anyone. It’s a perfect utility tool for land owners, outdoorsmen and backpackers, offering that little extra protection in the outdoors.”

Trailblazer just added the LifeCard Leather Sleeve that is custom fit to the .22 LR LifeCard, made in the USA of 100 percent genuine leather in black, dark brown or worn saddle (light brown) and features the Trailblazer logo stamped on the front. 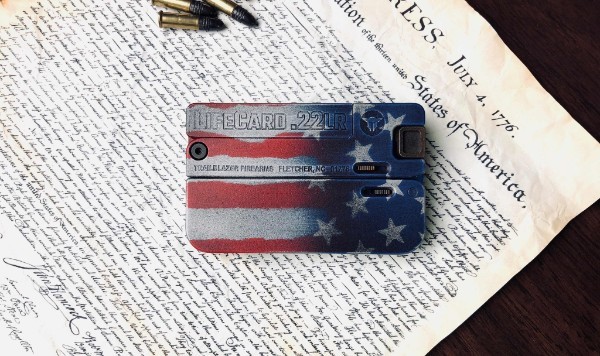 The pocket-sized, folding .22LR with serial number #01776 will be given away on July 11th. The custom Cerakote finish resembling our Nation’s flag is by…