Is your loyalty to a brand or organization making you a clear target? Right now, if you have bumper stickers and window decals on your car, specifically those with regard to firearms, shooting or firearm company logos, you might be a target. This is a divisive world where signage, stickers and hats can, shown to the wrong person or at the wrong time, can spell trouble and potentially make you a target.

While I am not suggesting you remove or eliminate your favorite firearm brand logos, NRA stickers, political affiliations, gun shapes, and accessory logos, what I am suggesting is you recognize the potential that these may present. The potential exists for you to be singled out and possibly be a target simply based on something like a decal on your back window.

Having stickers myself, well more correctly (owning a company in the firearm’s industry) I have large logos on both sides of my car.  I can say I will not stop driving my wrapped car, nor am I recommending you change your ‘signage’ either. What I want to point out is the possibility of what can happen to you.

I’m going to share a recent incident encountered by someone I personally know.

This incident happened in Florida on a six lane, well-traveled, busy road. The incident begins with a driver of an SUV, who happens to be a firearms instructor, driving his car northbound within the posted speed limit. This trainer, like many trainers, happens to have signage on his rear window advertising his CCW training company. What happens next probably happens to us all, while riding in the right-hand lane, suddenly a car pulls out in front of him from a side street, and clearly cuts him off. The trainer managed to slow down avoiding a collision with the woman’s car. He then continued on behind her at a safe distance. She continued drastically slowing down to a crawl never picking up speed to the flow of traffic. Noticing this, the trainer shifted lanes to pass the woman’s car on the left-hand side.  As he passed, the woman looked over and picked up speed staying neck to neck with him. The woman began yelling, rolled down her window and was doing all she could to keep the trainer from getting passed her. Ultimately gaining on him she quickly cut in front of the trainer now in the middle lane and again slowed down.  The trainer retained a safe distance and did not engage with the woman and continued on behind the woman’s car. Shortly thereafter the trainer noticed he was being pulled over by the county sheriff. He complied by pulling over immediately and so did the woman.

Unbeknownst to the trainer, the woman had phoned ‘911’ during this interaction and claimed a guy was following her and he had flashed his gun at her. Typically, when the police get a call that a gun was ‘shown’ and the person turns out to be in possession of a gun, it’s often an automatic assumption of guilt. This woman had a pretty good idea, seeing the signage on his back window, this CCW trainer was likely in possession of a firearm and tried to use that information against him. What this woman didn’t know was that this trainer had a dash-cam and was immediately able to prove the story to the deputy, what the woman claimed was simply not true.

This story demonstrates the connections people can make based on those stickers in your window or on your bumper.  It shows the need to be diligent and also why having a dash-cam might be a good idea.

We know both situational awareness and deference are a necessity while carrying a firearm.  But don’t forget to take into account the stickers or logos on your car and not to underestimate the ‘knowledge you share’ while displaying your passion and pride for firearms.  We tend not to think about the worst in others and how they can manipulate this information, but know it can happen.  It’s important to understand that your signs, stickers and logos can be seen, interpreted or manipulated by others and are not only a signal of your passion for firearms but can be used negatively and potentially against you.   Be safe out there,

Sometimes a pre-cursor to a Gunfight involves Hand-to-Hand Jitsu just to get to Glock-Fu.  Are we training correctly in preparation for that Gunfight? Unfortunately, there are… 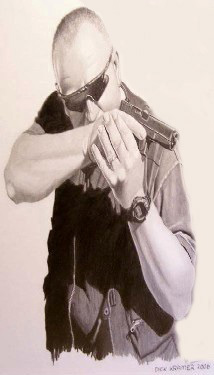 Is it Hollywood or the Real Thing? We all love action movies and chances are you’ve probably seen the movie John Wick and maybe the sequel…